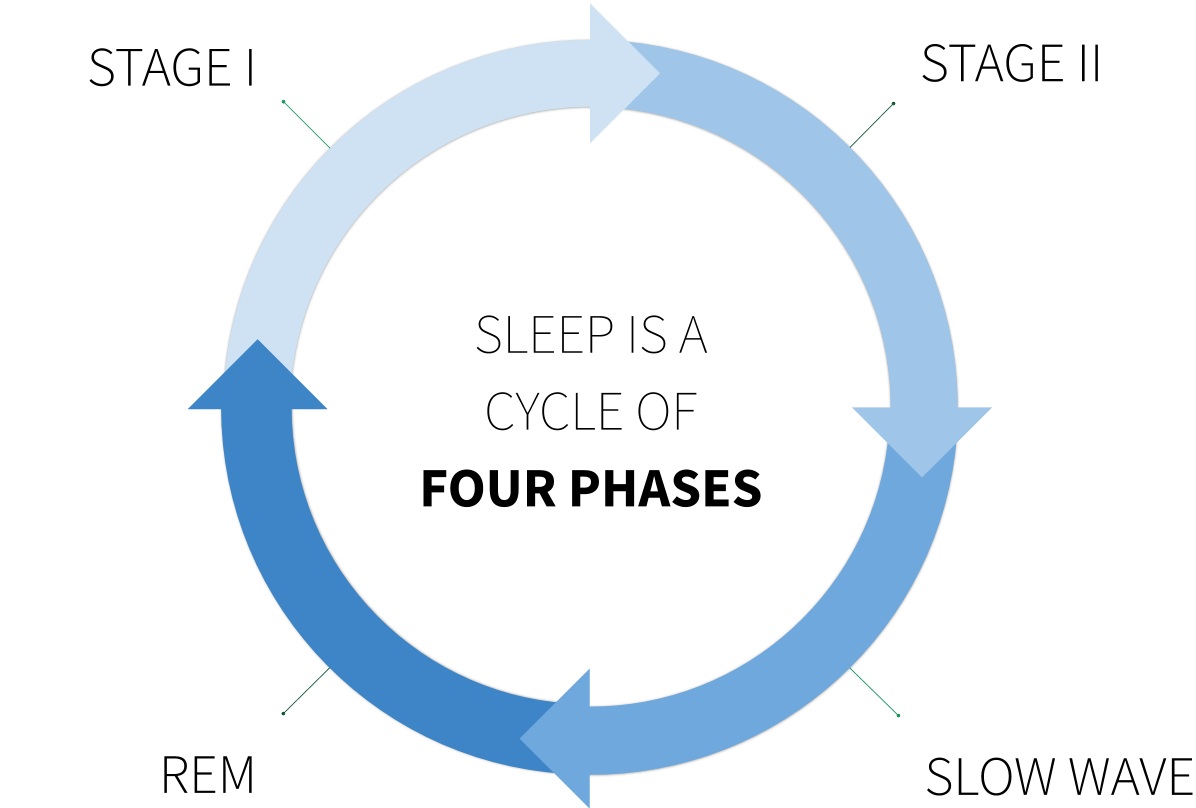 Stage I sleep is somewhere along the spectrum from drowsiness to being fully asleep, and is marked most easily by the appearance of drowsiness (decreased eye blinks, slow roving eye movements as discussed in the awake section), then a gradual loss of the PDR with coinciding diffuse attenuation of the tracing, and finally the presence of positive occipital sharp transients of sleep (POSTS) and vertex waves.

POSTS are a very descriptive waveform, as they are positive deflections seen in the occipital leads that look like sharps, but are not epileptiform, as seen below. Classically, they have a "sail-like" appearance, and can come in singles or runs. They arise in stage I sleep, but can persist throughout the later stages of sleep. POSTS have a cousin in the awake state called lambda waves, which are discussed in the artifact section.

Also found in stage I sleep are vertex waves, which are bilateral phase reversing discharges over the central regions. They can come alone or in runs of varying amplitude and morphology, but even when they appear very sharp or high amplitude they are not epileptiform. In children, vertex waves can be scary looking but still remain normal, as discussed in the pediatric section.

What state is the patient in on the tracing below?

This patient is awake but very drowsy. Recall that drowsiness is marked by diffuse attenuation and possibly mild slowing of the background, but you can still see a clear PDR in the posterior leads here. In the frontal and frontopolar regions, opposing slow undulations are seen in polarity, indicative of lateral roving eye movements. This occurs because the cornea is positively charged, and thus when you look to the right, the right eye's cornea gets closer to F8 and it sees a positive charge; at the same time, the left cornea moves away from F7 and thus it sees a negative charge. So, lateral eye movements lead to a frontal positive charge on the side to which you're looking, and a negative charge on the opposite side.

Stage II sleep is characterized by the arrival of sleep spindles and K complexes, although both vertex waves and POSTS persist into stage II from stage I sleep.
‍
Sleep spindles are symmetric bursts of 12-14 Hz activity arising from the reticular nucleus of the thalamus; they are so named because they can look like spindles of thread, as seen below. The absence of spindles, or an asymmetry of their formation or frequency, should be considered abnormal.

K complexes are very high amplitude, symmetric waveforms with initial negative followed by a slow positive phase, often but not always followed by a sleep spindle. They are named K complexes because in early sleep studies researchers noted that knocks or other noises while a patient was asleep brought them on.

Stage II sleep is characterized by all of the architecture from stage I -- including vertex waves and POSTS -- along with the arrival of sleep spindles and K complexes. Note the prevalence of POSTS on the first half of this page, then the high amplitude, diffuse and biphasic K complex followed quickly by a 12-14 Hz diffuse sleep spindle. This is an excellent example of a normal sleep tracing. There may also be a poorly formed vertex wave seen in the parasagittal leads in the fourth second of the page.

Slow wave sleep is marked by high amplitude, synchronized delta activity, usually 0.5-2 Hz in frequency. All of the architecture from earlier sleep phases (vertex waves, POSTS, spindles and K complexes) can be present in slow wave sleep, but usually become somewhat less organized, and often disappear altogether. Slow wave sleep can appear to be extremely high voltage, particularly in younger patients. Of note, medications such as benzodiazepines and barbiturates reduce the amount of this stages of sleep.

The presence of spindles--albeit subtle compared to prior examples--is the most obvious characteristic on this page, with some more diffuse than others. Thus this is--surprise!--stage II sleep. Again, there are still traces of stage I architecture via vertex waves, albeit very poorly formed (you know they are vertexes because, even though their formation is poor, there are subtle symmetric phase reversals over the parasagittal and central chains).

Rapid eye movement, or REM sleep, increases in frequency across the span of the night. It is marked by a diffuse attenuation of amplitudes, with a range of frequencies amongst the background that can look similar to an awake state. It derives its name from the rapid eye movements that arise and, on EEG, are seen as very sharply contoured, opposing waveforms (with the upslope usually faster than the downslope) in the left and right frontal regions.

These waves arise because the cornea is positively charged, so when a patient looks to their right, the right eye cornea moves closer to the F8 electrode, leading to a positive charge seen at F8; at the same time on the left side, the left eye's cornea moves away from the F7 electrode, leading to a negative charge seen at F7. Thus, opposing frontal waveforms are seen: a positive wave on the side to which you're looking, and a negative wave on the opposite side.

In REM sleep one can also see some mild cardiac irregularity and breathing fluctuations, and muscle activity should be absent throughout this stage.undefined

This page shows several clear vertex waves, marked by high amplitude and symmetric discharges in the parasagittal regions and centrally, with a few less well formed ones in between the ones marked in blue boxes. There are also poorly formed POSTS in the occipital regions bilaterally. This tracing appears to be in the initial transition from stage I to stage II sleep, as some of the higher amplitude background activity in the middle and towards the end of the page are K complexes. Of note, the frontal bursts of very high frequency activity marked in green are lateral rectus muscle artifact (which are more classically seen in REM sleep); these are discussed in the artifact section.

R E V I E W
Sleep is a series of four phases: stage I, stage II, slow wave sleep, rapid eye movement (REM)
‍
Stage I sleep is marked by vertex waves and positive occipital sharp transients of sleep (POSTS)
‍
Stage II sleep is marked by sleep spindles and K complexes
‍
Slow wave sleep is marked by diffuse, synchronized delta activity
‍
REM sleep has diffuse attenuation of activity with lateral eye movements in the frontal leads
CONTENTS
‍
Stage I
Stage II
Slow Wave
REM
Review
Thanks! This quiz is for self assessment only.
All answers are anonymous and used only to further refine our educational content.
Oops! Something went wrong while submitting the form.

Vertex waves can be very high amplitude, particularly in children. They often persist into stage II and slow wave sleep, but become less organized after stage I sleep.

Positive occipital sharp transients of sleep (POSTS) are normal waveforms that characterize stage I sleep. They are bilateral, but not necessary symmetric waves in the occipital regions, classically with a "sail like" appearance. Their counterpart in the awake state are lambda waves, which look the same and occur with visual scanning.

Sleep spindles are symmetric bursts of activity, usually 12-14 Hz, that characterize stage II sleep.  Like most sleep architecture, they can persist into slow wave sleep.

Spindles' name comes from their classic apperance similar to a spindle of thread, and they arise from the  reticular nucleus of the thalamus.

K complexes are very high amplitude, biphasic waveforms with an initial negative phase, then a large slow positive phase; usually, this large wave is followed immediately by a sleep spindle.

K complexes are so named because they were initially "knock" complexes--in early sleep studies, researchers noted they'd arise when a patient was asleep and a loud noise occurred.

Not all K complexes are followed by spindles, as seen here.

Particularly in younger patients, K complexes can be extremely high amplitude (they are sometimes called the highest amplitude normal activity the brain produces)

Here we see a good example of stage II sleep again, with architecture from both stage I and stage II. Note that the POSTS are poorly formed but in the right region/distribution. 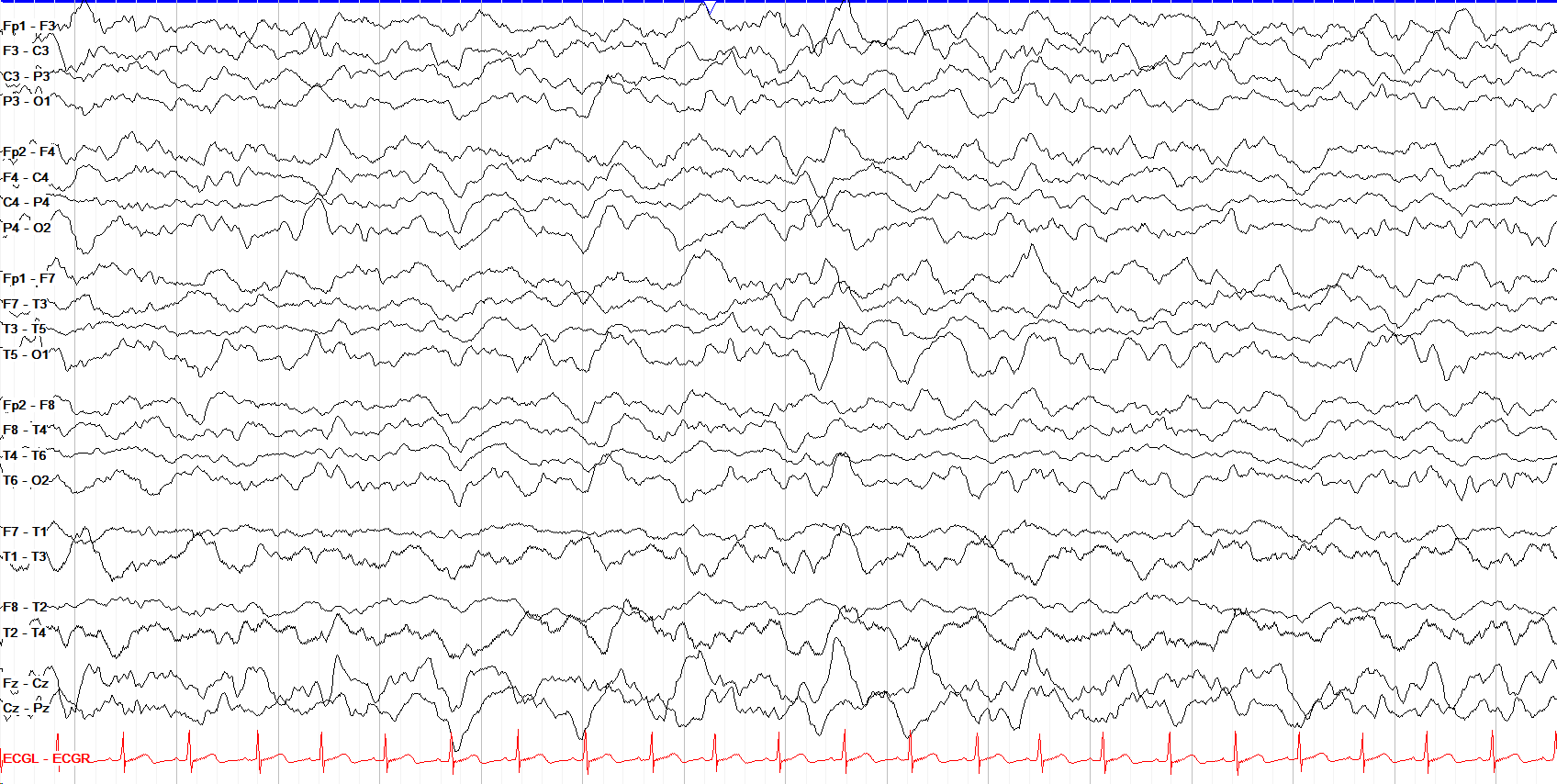 Often, sleep architecture from earlier phases of sleep recedes and becomes less apparent or organized in slow wave sleep, as in this example of a very poorly formed vertex wave

In the transition from stage II to slow wave sleep, the architecture from prior stages is more clearly preserved among the beginning of the higher, synchronized delta activity of slow wave sleep.

Arousal from sleep is typically seen as an abrupt cessation of the usual sleep architecture, along with myogenic artifact movement artifact, eye blinks and other signs of wakefulness.

Another example of arousal from slow wave sleep; note the loss, over several seconds, of the diffuse delta activity of slow wave sleep, and re-emergence of faster activities and myogenic artifact.

REM sleep is characterized by lateral eye movements, seen on EEG as opposing polarities at F7 and F8. This happens because the cornea is positive, so when the eyes look to the right, F8 sees a positive and F7 sees a negative charge.