Aside from the usual background findings and artifacts, EEGs will often have normal variant patterns that, to an untrained eye, may appear to be epileptiform or otherwise pathological and thus are at risk of being overcalled and leading to unnecessary tests or treatments. Technically these findings could be included in the normal awake and asleep sections, but they are not always seen and thus are not requisites for describing the background.

The Mu rhythm is the idling activity of the sensorimotor cortex, similar to how the PDR is the idling rhythm of the occipital regions. However, Mu goes away with both thoughts of and actual motor activity, and so is often not present (ex. if you think of moving the right arm, the left Mu will recede). As such, its not a required part of the background to comment on, but if you see it you should mention it.

Mu appears as arch-like alpha activity (usually 7-11 Hz) over the parasagittal regions; it can be bilateral but is often predominant on one side or the other. Particularly in cases of breach rhythm, it can appear rather high amplitude and sharp, but should not be mistaken for epileptiform activity.

There are two prominent findings on this page; where is the abnormal finding, and where is the normal variant?

This page shows prominent high amplitude, sharply contoured delta slowing throughout the left hemisphere, more prominent in the parasagittal than temporal chain. This is consistent with an underlying focal dysfunction of that region and breach artifact. There is mu rhythm seen in the right parasagittal region, marked by arch-like alpha activity that's often sharply contoured.

Wicket waves are so named because they are similar in appearance to the wickets (a set of three connected poles in the ground used in cricket). Somewhat simlar to the mu waves, wickets are arch-like, alpha range (again, usually 7-11 Hz) waveforms; unlike mu, however, wickets are seen in the temporal chains.

Don't confuse wickets for epileptiform discharges (even when some wickets may be larger in amplitude than others) as wickets have no aftergoing slow wave, do not disturb the background, and are nonevolving even though they may come in runs.

Is the discharge marked below a wicket or an epileptiform discharge?

This discharge is in the left temporal region, where wickets are expected to be seen. However, this particular discharge does not have the classic arch-like morphology of a wicket, instead showing a spike and slow wave appearance that is more in line with an epileptiform discharge. Furthermore, it has a field into the left parasagittal chain that would not be present with wickets.

Another example of EEG having very aptly named findings, rhythmic mid-temporal theta of drowsiness (RMT) is seen as sharply contoured, rhythmic theta activity restricted to the temporal regions; it is usually quite short, only a second or so. RMTD is usually most prominent in the mid-temporal region, and can be bilateral or independently unilateral. Note that RMTD does not evolve and thus should not be confused for a temporal seizure or brief ictal rhythmic discharge (BIRD).

Are the marked waveforms below wickets or epileptiform discharges?

These waveforms are sharply contoured, somewhat arcuate in appearance, come in bursts of about a second, and they do not have an aftergoing slow wave. All of these characteristics are consistent with wicket waves. Note that these wickets are coming both bilaterally and unilaterally, which is expected.

Lambda waves arise in the awake state when the patient is visually scanning something, such as with reading. Lambda waves are bilateral, symmetric sharply contoured positive occipital waves with a sail-like appearance, very similar to POSTS; unlike POSTS, however, lambdas come with other evidence of wakefulness, such as eye blinks, myogenic artifact and more, rather than early sleep. 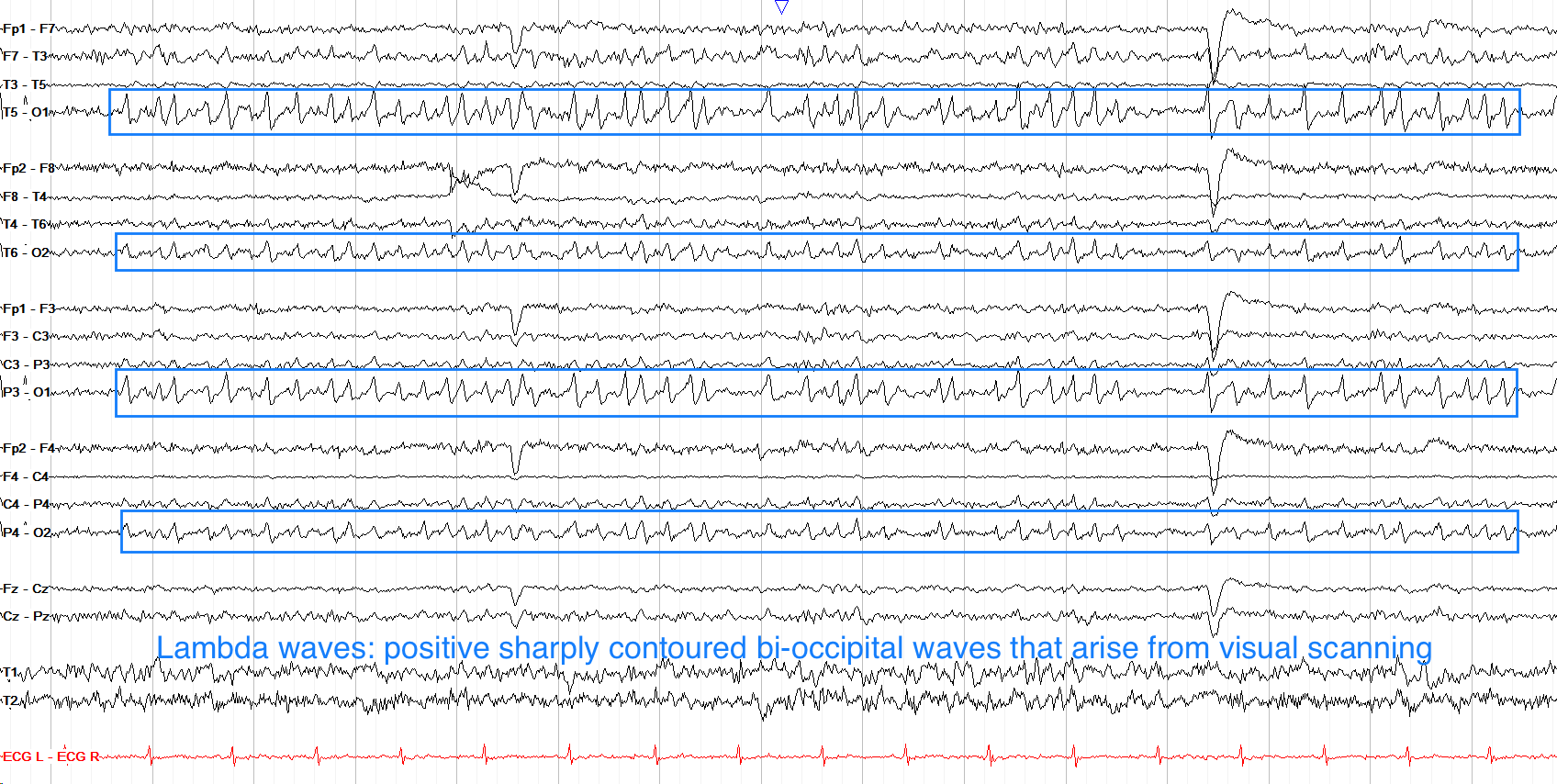 Are the waveforms marked below lambda waves or epileptiform discharges?

The marked waveforms, while relatively symmetric as you'd expect with lambda waves, are otherwise wholly different. First off, they have a negative polarity while lambdas are positive. Second, the marked waves have the classic epileptiform morphology of a spike and slow wave, although some show this more clearly than others. Don't let them fool you just because there are a series of them; epileptiform discharges can come in nonevolving runs as you see here.

Benign epileptiform transients of sleep (BETS) are also called small sharp spikes (SSS). While BETS have a slightly oxymoronic name, they are in fact a normal, benign finding that you can see in the drowsy and asleep states. In morphology they are very similar to epileptiform spikes, including having a field, but by definition BETS are low amplitude (technically less than 50µV) and short duration. They can be seen most often in the temporal chains.

Differentiating BETS from real epileptiform discharges can be hard when you're starting to learn EEG; a good rule of thumb is that if the discharge is very low amplitude and seen only once or a few times, and only during sleep, its probably a BET but you should make note of it and keep a look out for anything more suspicious.

Are the marked waveforms BETs or epileptiform discharges?

This is actually an easy question, as you can see a clear PDR of 9-10 throughout this page. Therefore, the marked discharges cannot be BETS, as BETS are only present in sleep by definition. In looking at the marked waveforms, however, they are also too high amplitude and last a little too long to be BETS, which should be very small (<50µV) and short.

Taking the crown for perhaps the most uninspired name of EEG findings, 14 and 6 positive spikes describe 1-2 second bursts of sharply contoured positive waveforms that come in frequencies of either 14 Hz (13-17 Hz) or 6 Hz (5-7 Hz), or an admixture of both. They should be bilateral and synchronous, and are more common in the posterior quadrants when drowsy. They are most often seen in young adults and adolescents, and are not associated with increased epilepsy risk.

In this first example below, you can see a one second run of diffuse ~14 Hz activity, consistent with 14 Hz positive spikes. 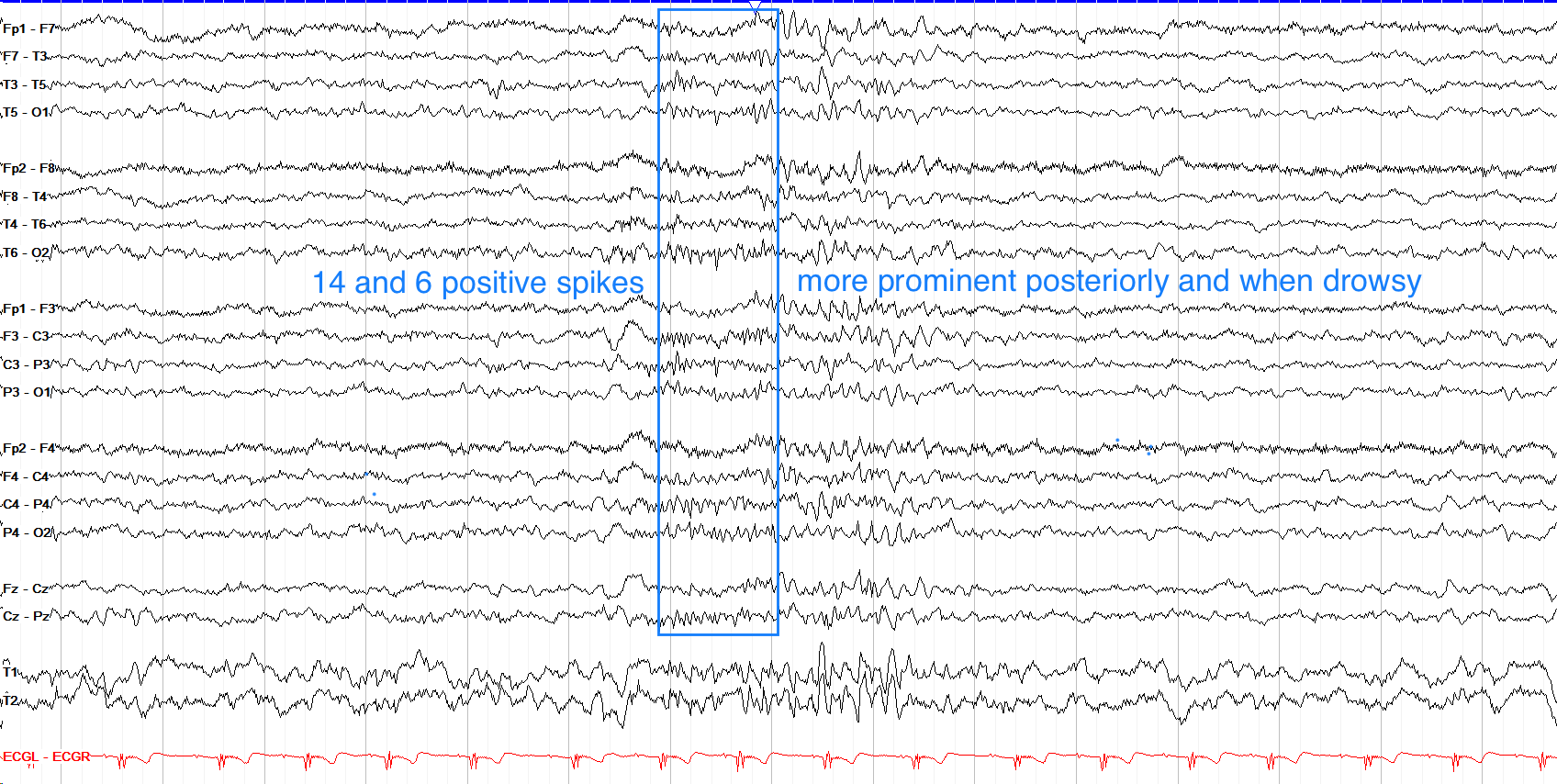 In this second example, you can see a one second run of diffuse ~5-6 Hz activity, consistent with 6 Hz positive spikes. Note that 6 Hz positive spikes have two subtypes described as WHAM (waking, high amplitude, anterior, male) or FOLD (female, occipital, low amplitude, drowsy). These subtypes describe themselves, really, and the important thing to remember is that WHAM are associated with epilepsy while FOLD are not. 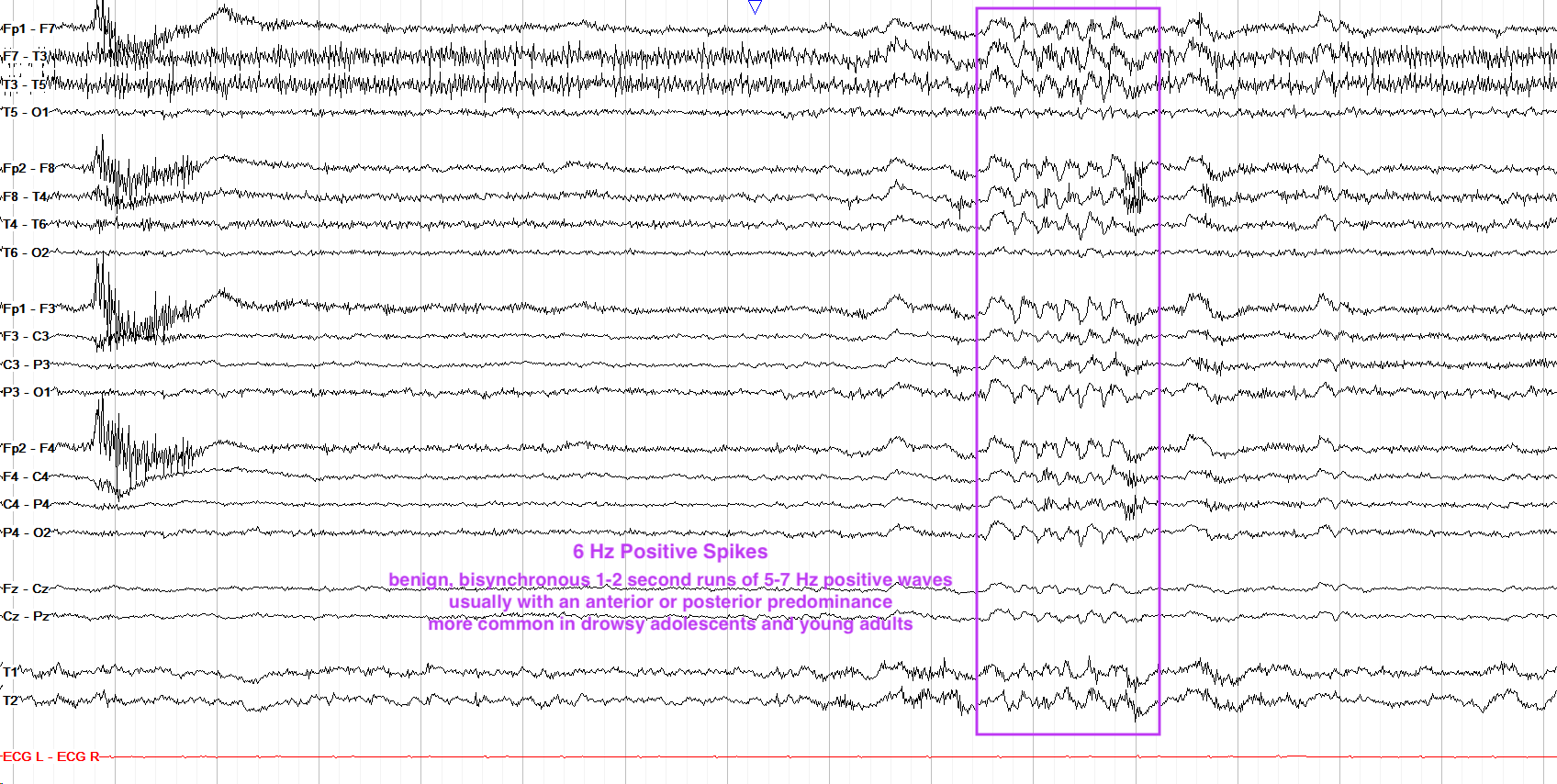 Which normal variant is shown below?

This page has intermittent periods of bilateral sharply contoured, arch-like alpha activity over the parasagittal regions without associated disturbance of the background. This is consistent with mu rhythm, the idling activity of the sensorimotor cortex that goes away when you think about movement or actually move an extremity.

R E V I E W
Mu rhythm is the idling activity of the sensorimotor cortex, similar to the PDR for the occipital cortex. Mu is arch-like and can be unilateral or bilateral; it resolves with movement or thoughts of movement of the contralateral body

Wicket waves are sharply contoured, arch-like temporal waves that can be unilateral or bilateral

RMTD is a common finding, marked by rhythmic theta in the temporal regions when drowsy

BETS are normal in sleep, and differ from epileptiform discharges in that they are low amplitude (<50µV) and brief

14 and 6 positive spikes are 1-2 sec runs of bisynchronous activity, seen more when drowsy in younger patients
CONTENTS
‍
Mu Rhythm
Wickets
RMTD
Lambda
BETS
14 and 6
Review
Thanks! This quiz is for self assessment only.
All answers are anonymous and used only to further refine our educational content.
Oops! Something went wrong while submitting the form.

Mu rhythm is the resting activity of the sensorimotor cortex. It appears as arch-like, sharply contoured alpha activity in the bilateral or unilateral parasagittal regions, maximal over the centroparietal leads.

Mu will recede with thoughts of movement or actual movement, and can be unilateral, bilateral or a blend of both. 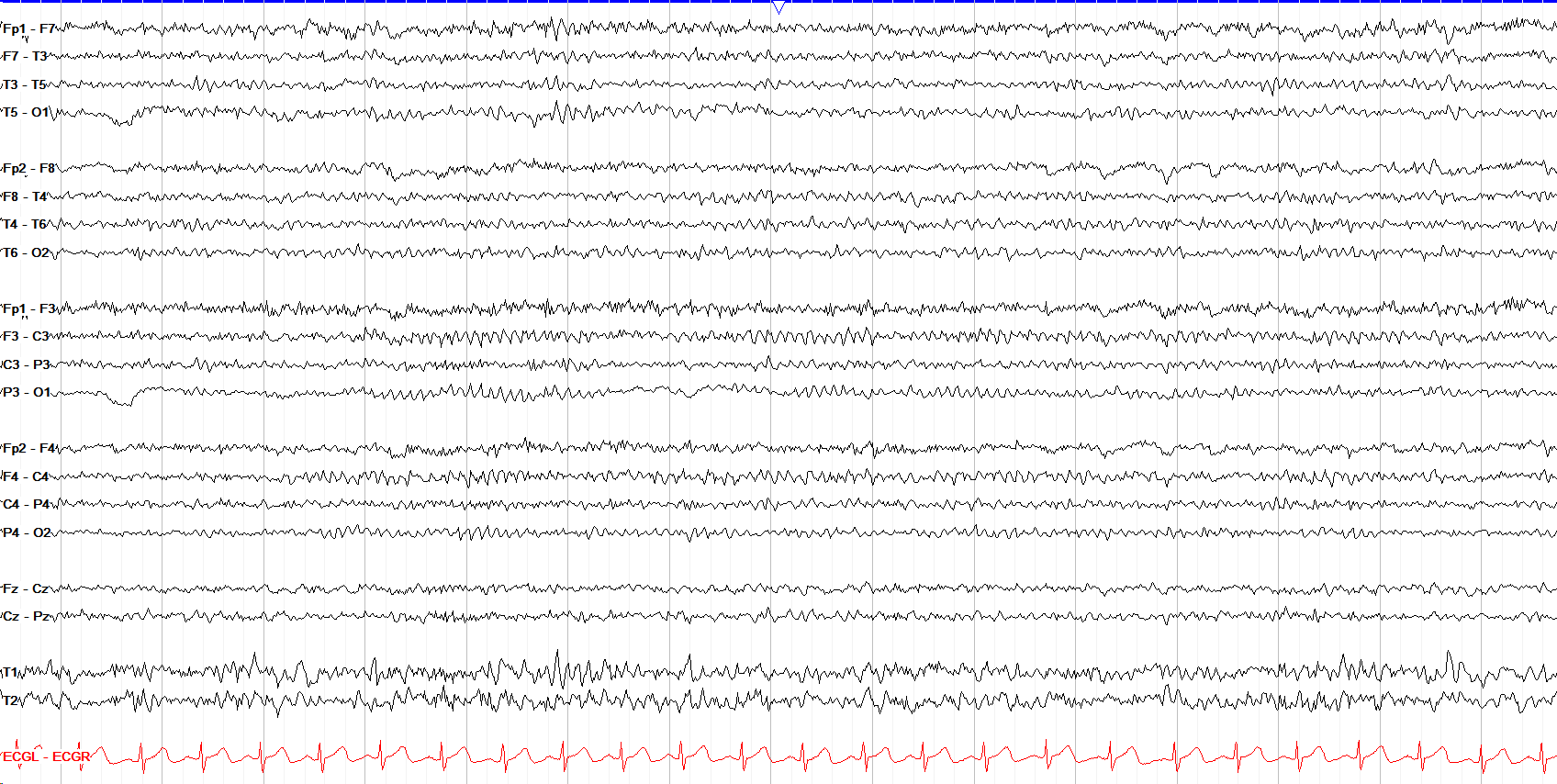 Don't mistake mu for wickets, even though both have an arciform morphology. Mu is over the parasagittal chains, while wickets are a temporal phenomenon and typically come in shorter intervals.

Wicket waves are sharp, temporal alpha frequency waves that can rhythmic in appearance and supposedly look like the wicket posts used in cricket. Each wicket should be the same duration.

Wickets are a normal finding and can be symmetric or unilateral, and more commonly seen in drowsy states. Note that wickets are temporal, and mu (which can look similar) is more central.

The field of wickets can mimic epileptiform activity, with their negative phase reversal, but wickets do not have any aftergoing slow wave as you'd expect with an epileptiform discharge. 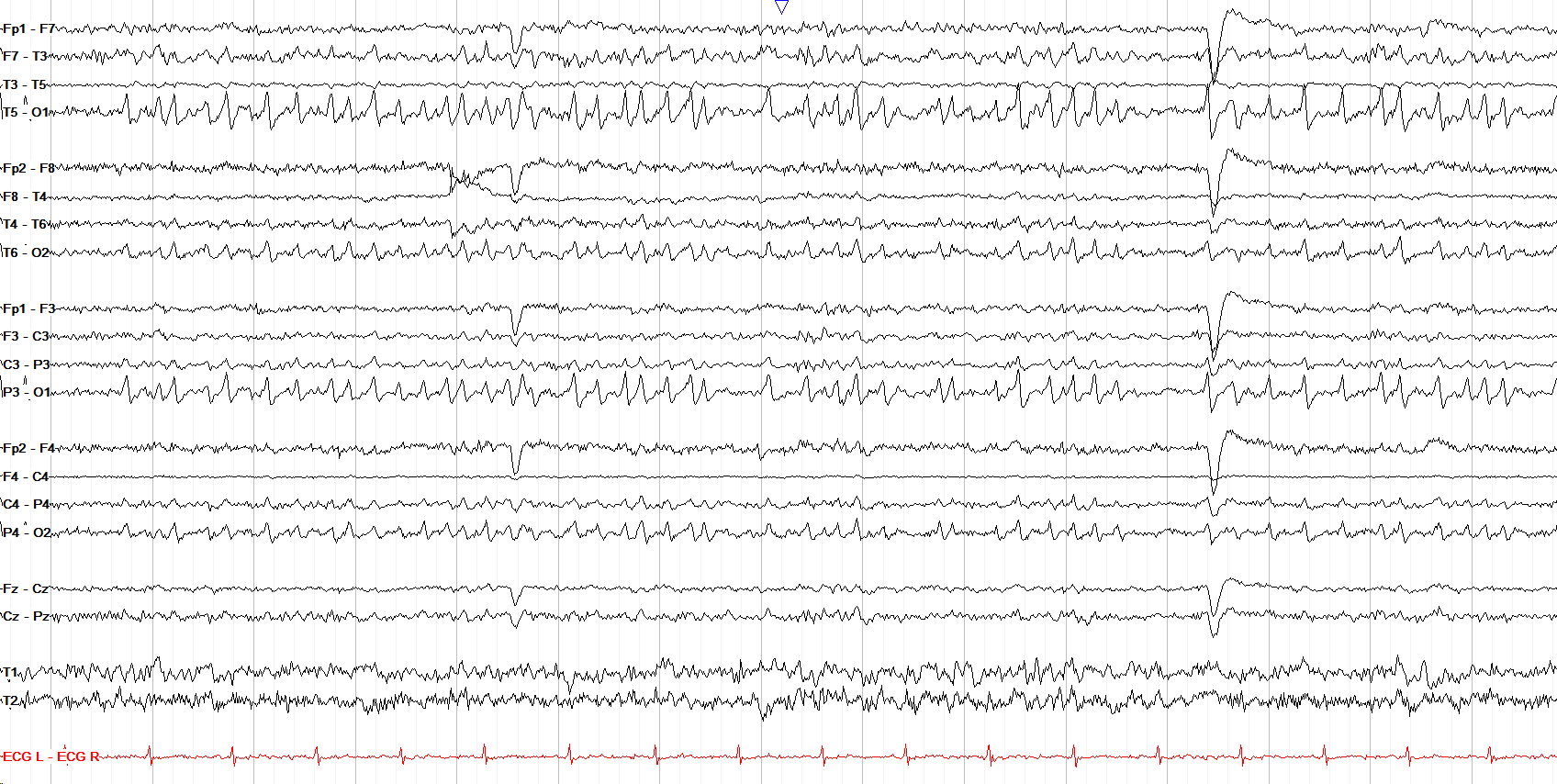 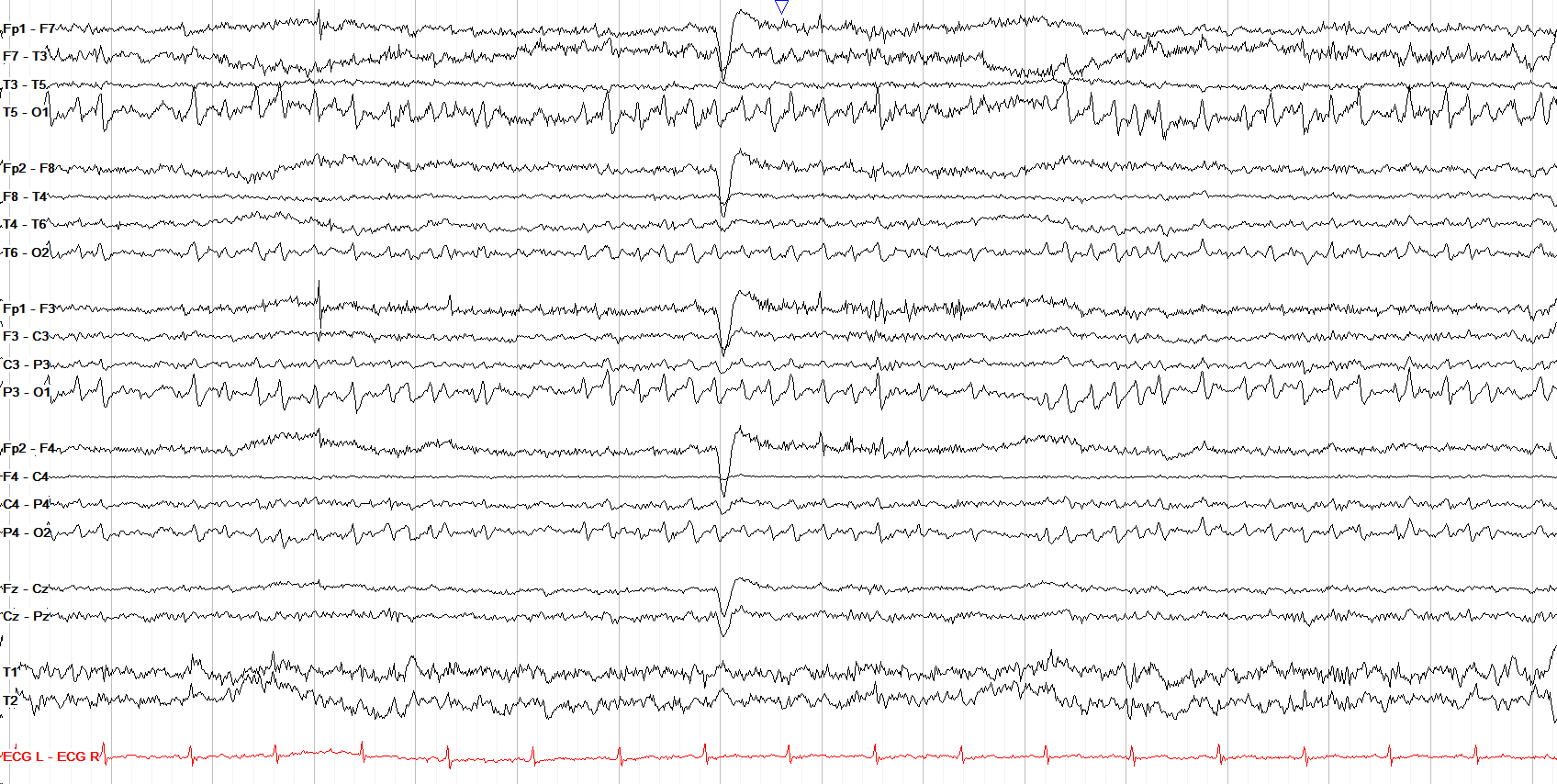 Lambda waves look almost identical to POSTS (a hallmark of stage I sleep) , but lambdas come with other evidence of wakefulness such as eye blinks. 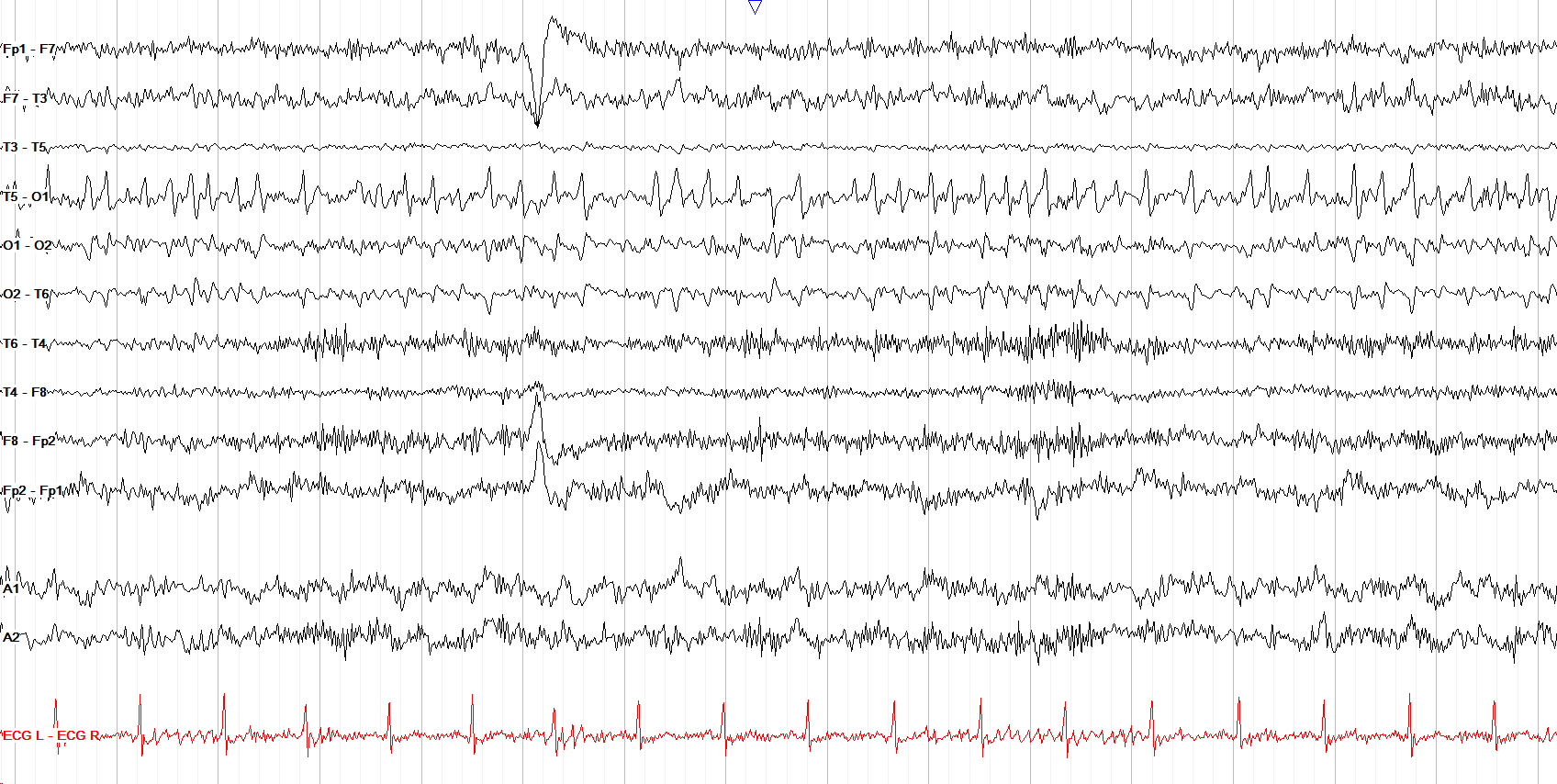 Here we see lambda waves in a circumferential montage, driving home the point that they are very occipitally focused.

rhythmic mid-temporal theta of drowsiness I

Rhythmic mid-temporal theta of drowsiness (RMTD) is a normal and very descriptive finding, being 1) rhythmic theta and 2) more common in the temporal regions (bilaterally or unilaterally) when drowsy.

RMTD is most often found in the mid-temporal region, and usually lasts less than 10 seconds. Unlike a seizure, there is no evolution, and there's not a spike wave morphology like you'd expect with a run of interictals.

BETS look very similar to epileptiform discharges, even having a field as such, but only arise during sleep (more often temporally) and are very small (<50uV) and short compared to real discharges.

BETS can be difficult to differentiate from epileptiform discharges early on--a good rule of thumb is that if you only see it once or twice, and it is less than 50uV, make note of it but don't call it epileptiform just yet. 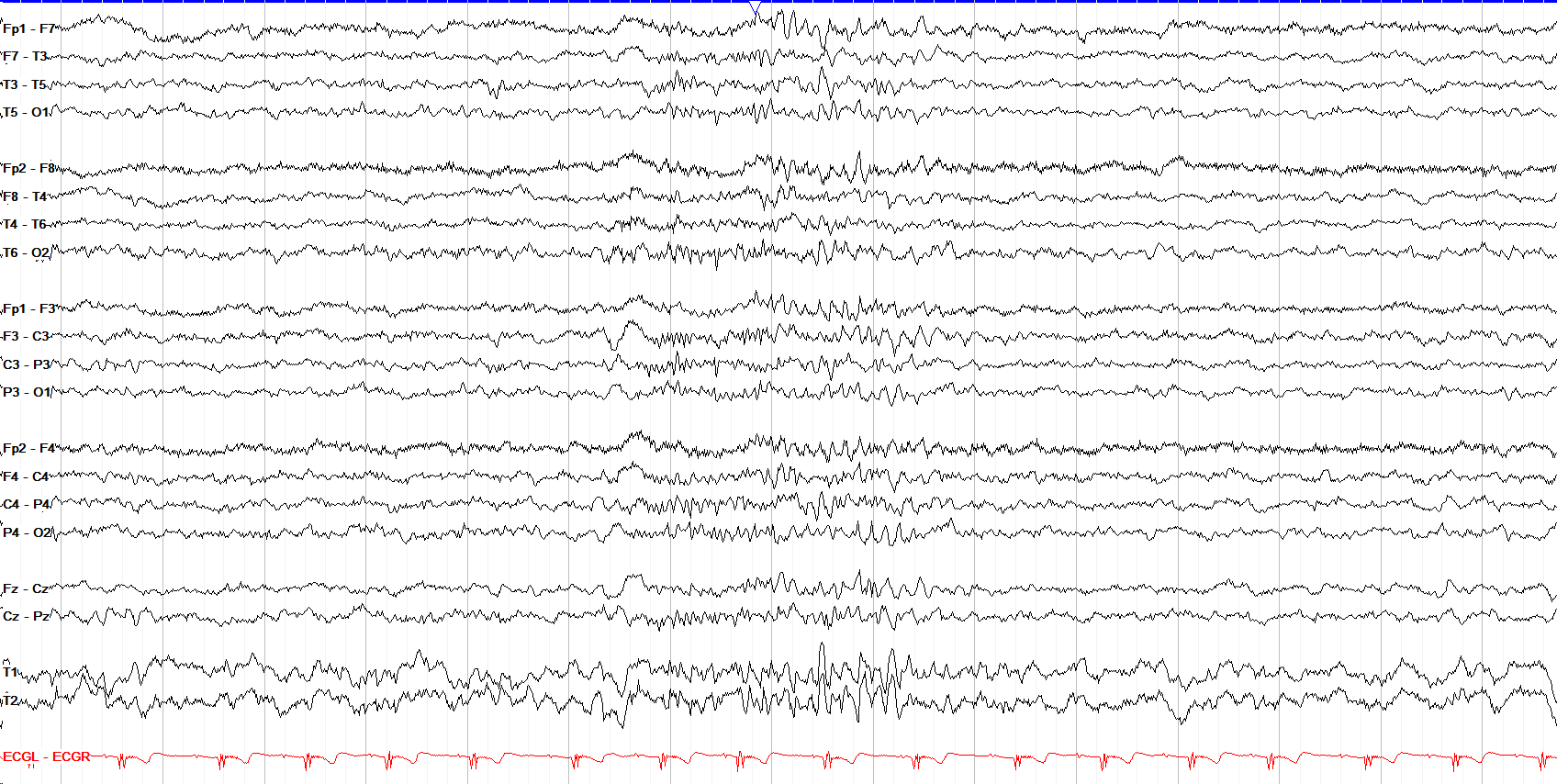 14 and 6 positive spikes describe 1-2 second bursts of bisynchronous activity of 14 Hz or 6 Hz, often with an anterior or posterior predominance. It is more common in drowsy younger patients. 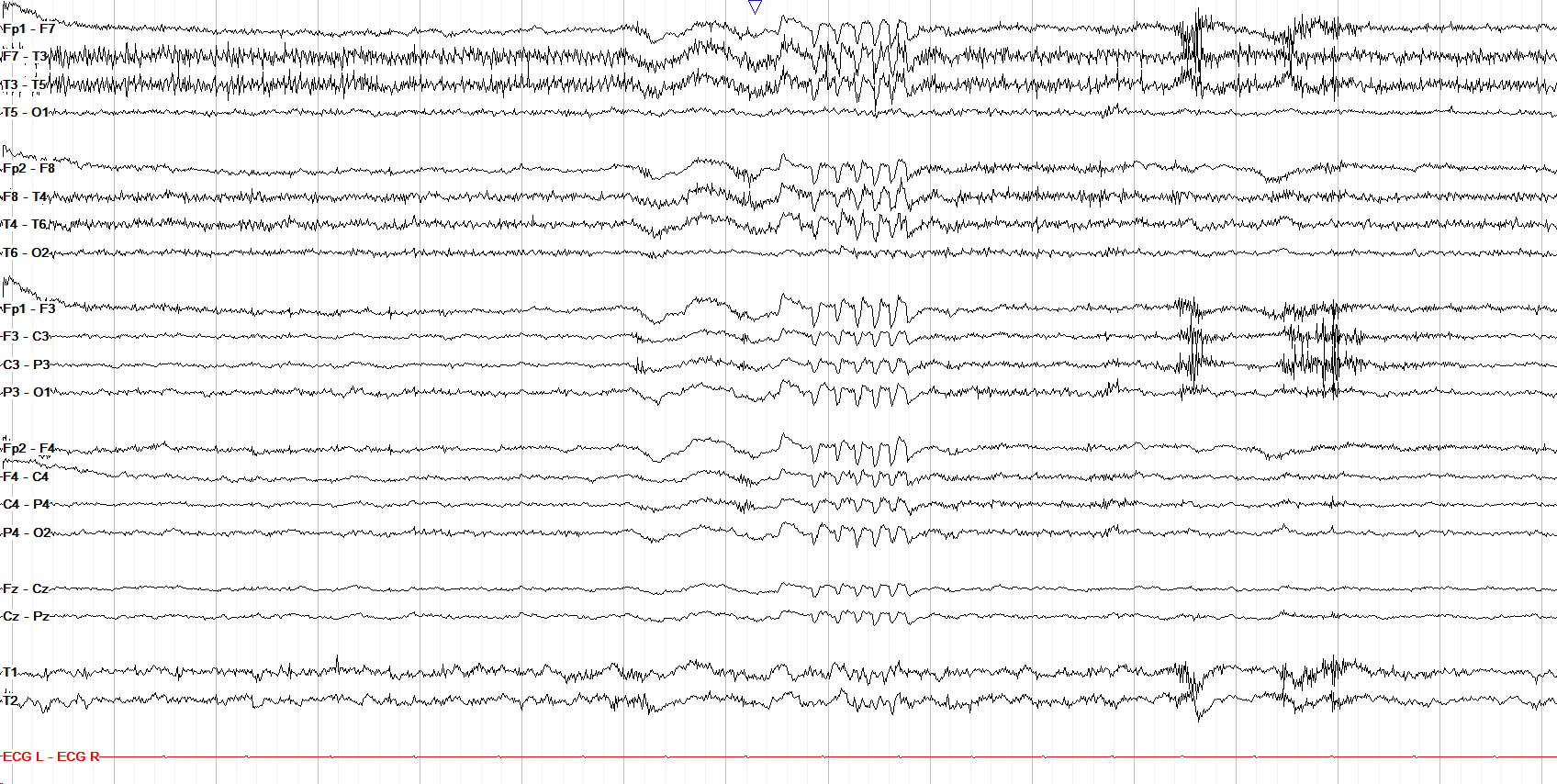